Briefings of the Present, #4

We’ve just talked about the team rankings, and the most attentive of you might have noticed a little side‑note in the corner of an image in the post regarding the diamond‑shaped tournament structure… that’s something only a trained macaquiño was supposed to notice, or remember… 🙈💎

Anyway, we’re now going to fill that gap and tell you about the promotions and relegations! ⚖️

How do they work?

Promotions and relegations are embedded in the conference ranking system.

There’s one single (but not simple) sentence, that sums up all that. Don’t be afraid to read it, it doesn’t bite! 😱

At the end of the season, promoted Teams get a better ranking than the relegated Teams of the division above.

That’s it. Once you get that, you know everything you need to know about this topic. The hard part is getting that 🧵

So, what happens when a season ends is that every Team is awarded a rank 🎖

This goes on, Feeder included 🧸

The Leagues for the new season are assembled: they start empty, and they are filled with Teams with higher ranks first 🤔

The result of this is that promoted Teams advance to the higher division, while relegated Teams are pushed back to the lower one 🤓 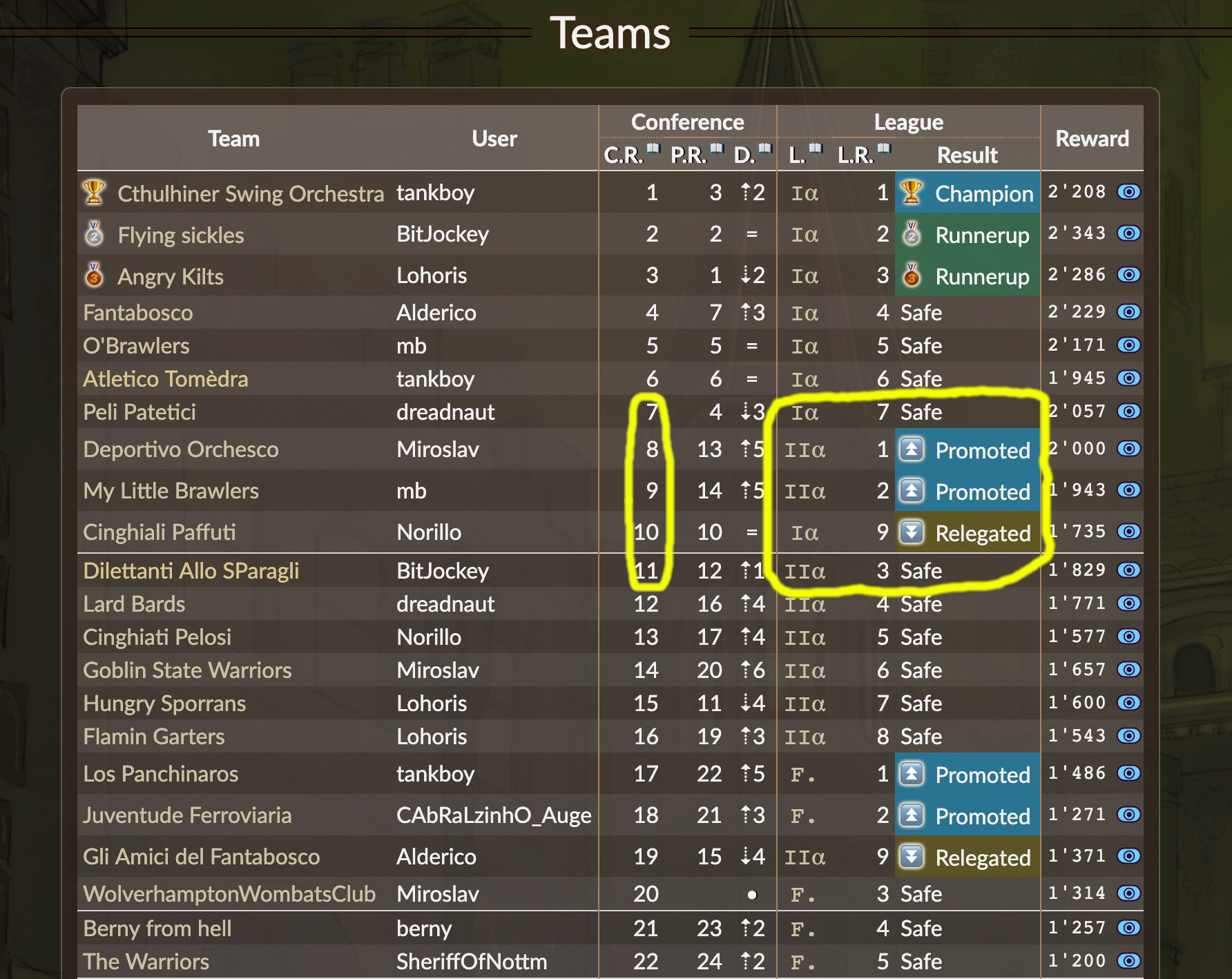 As you can see here:

Still not clear? Don’t worry, it’s not your job to understand this! I mean, I hope it’s not. Well, either way, ask questions, I’ll answer 😝

How many? That’s the interesting part!

Believe it or not, this is the interesting part of the post! How many Teams to promote and how many to relegate for every League? 🧮

In a perfect diamond, every division has exactly half or double the amount of Leagues of the division above and below 👌

Say that division I has 1 league (as it always has) and division II has 2 leagues… the most natural idea would be to have 2 relegations from division I, and 1 promotion from each of the division II leagues.

However there may easily be odd cases, because we don’t always have a perfect diamond. For instance, division II might have 2 leagues while division III had 3. There’s no way to perfectly balance them out 🌙

The result was that 3 Teams were promoted, 3 were relegated, and 1 was saved. This was much preferable to the alternative: having a Team not promoted when it should have been! 🤨

Recently, we have planned to change this: we always relegate 2 Teams and promote 2 Teams from every League, but only the first one is called “guaranteed promotion”, and only the last place is defined as a “guaranteed relegation” 💡

The second place is a “possible promotion”, and the ninth (out of 10) is a “possible relegation”. They will still be ranked exactly as if they were promoted or relegated, but the Users are made aware that the outcome is uncertain 🧐

The drawback of the previous mechanic was that in case of numbers not adding up, higher priority was given to saving the relegated Teams from the upper division, instead of promoting more Teams from below 🤗

This isn’t ideal, because relegations are important: they allow a Team who performed badly, to face easier opponents. And promotions are cool: they give you the chance to rise and shine 😎

With this new mechanic we’ll tend to have slightly more extra promotions, instead of less relegations.

We could have also discussed the idea of having a total of 3 promotions (1 guaranteed, and 2 “possible”) instead of 2, but we’ll save this subject for another time 🐸

Meanwhile, have a brawly brawl!